We Have a Great Selection of Imported Beers!

Japan produces some outstanding beers that feature world-class quality and brewing technologies, and these are definitely not to be overlooked.  It offers quite the varied selection, including the top notch malt beers,  the more affordable happoshu (lit. “sparkling alcohol”, also known as low-malt beer) and “new genre” beer (no malt beer). In addition, regional craft beers have become highly popular in recent years.

We especially recommend the award-winning Hitachino Nest Beer.  One of their top-selling beers is Hitachino While Ale, a refreshing mildly hopped Belgian styled beer with a complex flavor of coriander, orange peel, nutmeg. White Ale has won gold medals at several beer competition in UK and US.

So how about trying some Japanese beers in a style that is unique to Japan? We also have the perfect snack to go with the beer!

The Prefect Snack to Go with Your Beer!

Kaki No Tane is one of the most popular snacks in Japan. Translated as persimmon seed because of their shape and size, these soy sauce flavored rice crackers go well with any beverage, especially beer. Peanuts are mixed in giving them a nice texture balance. Gently spicy and with a heart crunch, the harmony of peanut and rice cracker is astoundingly delicious! Make sure to eat them together for the best flavor results.

There are many manufacturers of Kaki No Tane but Kameda is the most respected because of the quality. Kameda Seika’s Kaki no Tane is a long-seller known all around the country.

Kaki no Tane has an array of different flavours, and our recommendation this time is the wasabi one! The spicy wasabi seasoning leaves you with that classic wasabi tingle in the back of your nose, without overpowering the delicious umami of the soy sauce crackers.

Have You Ever Been to Gifu Prefecture?

Gifu has many popular tourist attractions, bringing visitors to all parts of the prefecture. If you’ve ever been to Gifu, you have probably visited the most popular places such as Gero, Shirakawa and Takayama. Gero is known for its relaxing hot springs, which attract visitors throughout the year. Shirakawa’s historic villages are a UNESCO World Heritage Site. Takayama is famous for retaining its original appearance and is often referred to as Little Kyoto.

While enjoying the famous dishes of Gifu, such as Hida beef, Keichan chicken or Takayama ramen, you may have also drank a glass of Gifu sake. If you haven’t, or you would like to remember the distinctive taste of Gifu sake, we have just the right product so you can have that experience conveniently at your home!

In the middle of the Edo period, at the beginning the An’ei era (1772), Tetsuji Mizuno opened a sake brewery in what is now Tajimi City, Gifu Prefecture. At first, the brewery was named Maruo, which was later changed to Kogane. In 1926, Michisakari was chosen; it means “flourishing for three thousand years.”

In the post-war era, when the trend in Japan was for sweeter sake, Michisakari took the challenge to brew dry sake, but not without a series of hardships. There were voices inside and outside the company saying that the sake won’t sell well, if it’s not sweet. However, even in the midst of this, there were people who encouraged the brewery not to change the current taste. Encouraged by those people, they were able to continue their efforts to make a dry sake that was soft to the palate and easy to drink.

Michisakari’s dry sake was also popularised by famous novelist (awarded the Order of Culture by the Japanese government), Tatsuo Nagai, who happened upon Michisakari by chance. He fell in love with the clear, dry flavour and recommended it to many acquaintances, and soon it was in restaurants and sushi bars all over Japan.

We recommend trying Michisakari Junmai Daiginjo Kojikomi, which is the highest grade sake of the brewey. In order to further evolve as a karakuchi sake, the brewey has selected the ingredients from scratch to create a highly aromatic taste, a clear aftertaste, and a superb sharpness. The result is a sake with a distinct Michisakari character.

While you definitely don’t need an excuse to open a bottle favorite red (or white) wine at the end of a long and stressful day,  we think that  it shouldn’t stand in the way of celebrating Drink Wine Day.  A glass (or maybe a whole bottle) of wine is really the perfect antidote to these stressful times, after all.

National Drink Wine Day is celebrated annually on Feb. 18 and the purpose is not only to drink wine, it  also about “spreading the love and health benefits of wine,” according to the National Drink Wine Day website. Wines do actually have some health benefits. Scientific studies have shown that moderate drinking of wine might reduce the risk of liver disease, type II diabetes, heart attack, stroke, and a certain type of cancers. It can also reduce bad cholesterol and can increase the good (HDL).

Wine has been a staple in human culture since its invention in 7000 BC. Some ancient societies enjoyed their wine so much, they even worshipped it! These days, hundreds of types of wine are produced all over the world, so there is an endless variety to choose from. However, we have just the perfect wine recommendation!

Tamba Wine was established with the goal to make a wine that would go well with Kyoto cuisine, one of Japan’s traditional cuisines. The founder of the winery was inspired by the delicious wines he had tasted overseas that he did not enjoy when he drank them in Japan. Today, the winery is known for producing mainly delicate tasting wines and has traditionally challenged the experimental cultivation of various international varieties.

Tamba Harimasan Merlot is a medium light, well-balanced wine with a scent that makes you feel like you’ve found a lot of berries while strolling through the forest. It has a slightly light finish, with a refreshing and easy-to-drink mouthfeel, and a moderate tannin. A great food pairing for this wine is shabu-shabu with sesame sauce.

Open a bottle of this Japanese wine to make this Drink Wine Day more special!

In Fushimi, Kyoto, there is a sake brewery called Saito Shuzo, which brews Eikun sake. The brewery has set an unbroken record of winning the gold medal for 14 consecutive years at the National New Sake Competition, an annual competition for new sake, and focuses on brewing sake using Iwai rice, which can only be produced in Kyoto and used only by breweries in Kyoto.

Iwai rice is known as difficult to work with, as it is very springy and tends to ball up easily, and because it is hard to break up, it doesn’t dissolve easy, which affects the taste of sake. However, Saito Shuzo went through a trial-and-error process for about two years, and they now know how to control it well. And they made the right choice indeed – with Iwai rice you can get a unique and great flavor that no other sake has.

Click on the  banner to watch the process of making Eikun sake!

KOTOSENNEN brewed from  55% polished Kyoto’s original invented Iwai rice. Iwai is a classic sake specific rice from Kyoto. It tends to produce an elegantly fragrant and mellow sake with a soft texture.

This unique Japanese style Lager is brewed with akamiso (red soybean paste), a specialty of Nagoya, Aichi Prefecture. Exotic and unorthodox, it has a beautiful bold palate with rich flavour and a sweet scent, created by combining the umami of red miso and malt. The velvety smooth finish and its miso flavour is well suited for this style of beer and is a must-try among beer advocates. And we have just the perfect snacks to go with this unique beer!

Hagi Roll is  dried filefish (kawahagi). This item is basically a fish jerky. You can taste the rich and deep oceanic essence and flavor. Though a unique acquired taste, it is one of the most popular snacks (otsumami) for drinkers in Izakaya restaurants. Toast the surface, cut into small pieces and serve with Japanese mayonnaise!

This snack is is made of surimi and baked in a delicious kamaboko (fishcake) style. The soft texture is addictive! It is cut into small easy-to-eat pieces and is a staple snack in Japanese homes that goes well with beer, or any other alcoholic beverage. Use toppings such as mayonnaise, shichimi, and soy sauce to make it even more flavorful!

The popular sake is now in stock again!

In May 1890, the founder Jisaku Omura of Marufuji built a small winery in the garden in front of his house. Since then, four generations of Omuras have been dedicated to winemaking. Marufuji aims to make world class Japanese wines from traditional grape varieties such as Koshu, Cabernet Sauvignon, Merlot, Petit Verdot and Chardonnay.

The winery is located in Katsunuma, Koshu City in Yamanashi prefecture, known as Japan’s wine country. Situated on the foothills of Mt. Fuji, Katsunuma is surrounded by beautiful mountains and pristine nature. Since old times, many kinds of fruits have been cultivated in Katsunuma, giving it its reputation as the home of Japanese grapes and wine. 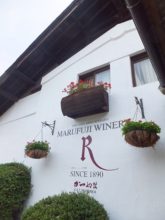 Winner of the silver medal in the 2015 Japanese Wine Competition (2014 vintage), Rubaiyat Koshu Sur Lie is a fruitier Koshu wine made from grapes grown in Katsunuma. This wine has a charming fruity aroma that leads into a pulpy body with a clean acidity and faint candied-fruit sweetness. It was fermented at 18-20°C in a glass-lined tank and aged on lees for approximately 7 months.

It is made by the sur lie method, which gives it a lively aroma and a thick flavor. The wine is not filtered much to preserve the flavors. This wine shows the characteristics of the sur lie method well. A food-friendly wine, it is easy to match with Japanese food in general, but it is especially good with seafood dishes. We recommend trying this wine with sushi or sashimi!